Ben Youdan is a visual artist based in Liverpool, U.K. His work uses a wide variety of techniques and processes including collage, painting, printmaking and photography, to create imagery that takes inspiration from the iconography and ephemera of popular culture. His pieces explore themes such as identity, glamour and sexuality. They are a handmade product of the machine age and a comment on the human condition in the context of the new media landscape.

He has been involved in a wide variety of creative endeavours over the last few years and most notably his work has been shown in several group shows both in Europe and the United States, has been featured on Madonna’s Rebel Heart World Tour as well as being the subject of four solo exhibitions in the UK. In addition to this he has been involved in a diverse array of private commissions and his work is contained in private collections around the world.

Ben was recently Artist in Residence at the Tom of Finland Foundation in Los Angeles, before exhibiting his critically-acclaimed show ‘FILTH’ with Duovision Liverpool, supported by The Arts Council England.

Celebrating queer male sexuality, Filth is a new exhibition from artist Ben Youdan, exploring gender identity, leather and fetish subculture. In his first show since his residency at Tom of Finland Foundation in Los Angeles, Filth is a series of portraits embodying the joy and freedom of queer sex and sexual expression. 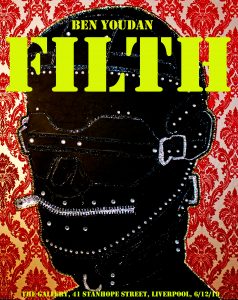 The exhibition has been twelve months in the making, with work beginning in LA. As part of its ambition to promote erotic art, the Tom of Finland Foundation hosts an artist-in-residency programme, allowing time to create, research and inspire new work. Youdan began to create the work for Filth while in the ‘Tom House’ from December 2018 to March 2019, researching Tom’s archive and work at the Foundation. Making connections with the Leather community of Los Angeles, Youdan exhibited a series of six mixed media portraits at the end of his residency. These works have developed into the new collection for the Liverpool exhibition.

“This exhibition in Liverpool is a sex positive, unashamedly celebratory show. Eroticism doesn’t need censorship, is it something to be championed”.

Filth is curated by Duovision with assistance from Arts Council England.

Ben Youdan is a Liverpool-based artist whose mixed media portraits adorn the walls of galleries and private collections alike. Tackling celebrity, sexuality and gender, his colourful and eyecatching portraits are filled with a dual narrative, poking fun at hypocrisy, doublespeak and the mixed messaging that fuels popular culture. 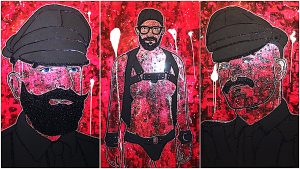 Part of a group show of fetish art.

MASC – THE MEN OF LOS ANGELES

Six new mixed media portraits of the leather men of LA, inspired by Ben’s 3 months as Artist in Residence at the Tom of Finland House.

TALES FROM THE CITY

Solo show – examining the duality to glamour; seductive, appealing and beguiling on the surface but often dark, disturbing and sinister underneath. Now closed. Reviews below.

For sales, commissions and other enquiries, hit ‘Contact Me’.